Lindsay and Derek, along with their five kids, sold their home in Texas and decided to buy an RV and hit the road full-time. The Lanes are focused on intentionally cultivating relationships and curating an education for their children that brings learning alive. They’ve found a way to balance life, work, travel, and homeschooling, all from the comfort of their Keystone Cougar fifth wheel. And they wouldn’t have it any other way.

“Will I find friends?” You may have found yourself asking this same question if you’ve ever considered full-time RVing. It’s common for potential RVers to stop and think about the community they’ll be leaving behind, and the unknowns of friendships they may—or may not—find on the road. My husband and I had this same question, not only for us as individuals, but for our five children as well. Because, if we’re being honest, no matter how close our family may be, we didn’t want our only social interactions to be the seven people living inside the RV.

But I’m here to tell you that, no matter how big your friendship fears or concerns may be, a beautiful RV community is out there and it is ready to welcome you.

When our family decided to buy an RV and hit the road in 2018, we felt fairly confident that we would meet other people and form some new friendships. But what we didn’t realize was how easy it would be or how quickly it would happen. We had only been on the road for a few weeks when I saw a post in a Facebook group for full-time RVers. Someone was organizing a big pot-luck dinner at the campground we were staying at, and so we decided to join. It was at that first dinner where I realized just how incredible the RV community is. The other parents were extremely welcoming, our kids immediately started playing with the other kids and the conversations flowed effortlessly. It didn’t matter if you had been RVing for three weeks like us, or multiple years, the feelings of acceptance and understanding were universal.

We continued to stay in-touch with some of those families, mostly through social media, which led us to meet other families. We started following and connecting with families that had kids the same ages as ours and who had started full-time RVing around the same time as us. Even if we didn’t have anything else in common, those two things were enough for us to form a connection.

It was just a few months later, while we were camping on the beach in Southern California, that I decided to plan my own meet-up. Some of the families we had met through social media were also in the area and I wanted to find a way for everyone to meet in-person. Five other families came to my meet-up dinner and we had an absolute blast. In fact, a few of those families have become our closest friends and a core part of our road community. And it’s all because we connected over an app and willingly decided to meet strangers on a beach.

Over the next few months, we continued to meet more and more people. I would utilize region-specific Facebook groups to find other full-time RV families that were in the area, and then either attend a meet-up or plan one myself. We’d spend our evenings gathered around a campfire swapping stories and meals, while our kids played and laughed nearby. We’d see both familiar and new faces at these meet-ups, and slowly our road community started to expand and deepen. The initial questions about where we were from and how long we had been on the road began to turn into deep, meaningful conversations about life, children, marriage and the future. When we left our hometown in Texas, we left an amazing community of people behind. But being on the road, we were finding and experiencing a community like we had never known. All of us—myself, my husband and our kids—have grown as individuals and as a family thanks to the people we’ve met.

During one of our first winters on the road, we decided to meet up with some families in Florida and spend the holidays together. On Christmas Eve, we all met in the lodge at the RV park and had a giant pancake breakfast. And while it was hard being away from family on Christmas, I realized that the people around me had become my road family. Over the course of the week, we had multiple dinners together and a big New Year’s Eve party. Us moms would share morning coffee together, and laugh about hair washing routines and the joys of full hook-ups while our kids played outside.

That week in Florida became pivotal for many of us. We started referring to it as ‘Winter Summer Camp’ because of all the fun we had and the memories we made. From that point on, we decided to intentionally plan our travel schedules around doing an annual Winter Summer Camp in Florida.

And so, without fail, every winter season, a group of us heads down to Florida and stays at the same RV park. Our group has grown over the years, as families meet others and invite them along. We’re always excited to meet new people and welcome them into our road community. Even if we all can’t find a spot in the same park, we’ll jump around and spend a few weeks in one place and a few weeks in another. The whole point is that we can just be near each other.

As we now enter our fourth year of full-time RVing, we have so many incredible memories to reflect on. It’s amazing to look at old pictures and see how our kids have grown together. All of the kids are like cousins, and the parents are like their aunts and uncles. We look out for one another. We’ve built some incredible friendships with families from all over the country—people that we probably never would have met had we not decided to RV in the first place. And it’s crazy to think this all started from one pot-luck dinner and some social media connections.

This camping trailer affectionately nicknamed a “Fiver” is a favorite of many, especially those taking extended trips or traveling full time in their RV. The prominent overhang resting above the tow truck bed is frequently employed as a bedroom suite, or, more recently, a living room or even a kitchen. 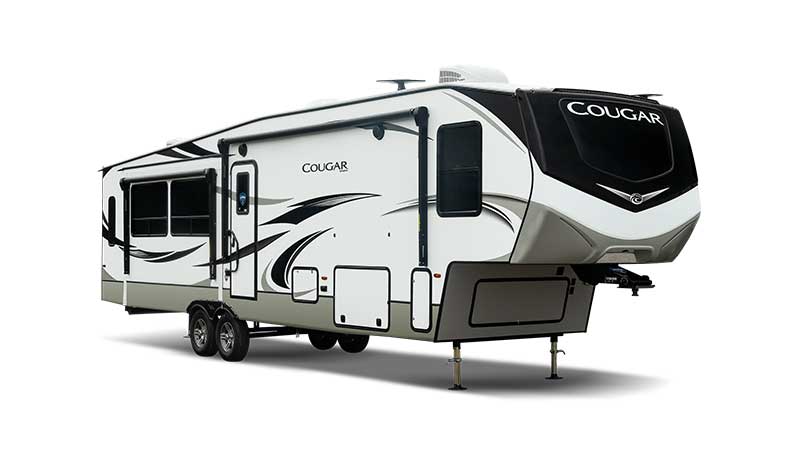 Whether you're new to the world of RVing or you're ready to narrow your search, we're here to help you sort through it all and find the RV that's right for you. Explore RVs based off of your lifestyle and the features important to you.